Times of India by Divya Kaushik

A heap of destroyed paper, placed neatly in four columns of a square frame with a mirror-like surface, looked like an unusual installation to visitors at one of the booths at the India Art Fair in Delhi. Many passed by it without bothering with a second glance until the artist, who was standing next to it, revealed that the heap of paper was actually demonetized Indian currency, amounting to Rs 1 crore (aprox. $1.3 Million Dollars). The artist, Alberto Echegaray Guevara, who is from Argentina, revealed that he got the Rs 1 crore in Indian currency from the Reserve Bank of India a year ago, when it was still in circulation. “I’ve been creating artworks from currencies of different countries. I’ve been to 17 different central banks all over the world, and one of the last ones I visited was the Reserve Bank of India. I took the necessary permissions from authorities in India, and it took me a year to complete formalities to get Rs 1 crore in exchange for (American) dollars. At that time, one dollar was equivalent to Rs 53,” said Alberto, and added that the idea was to destroy the currency to create the artwork, but thanks to demonetization (which happened in November), “the artwork is more relevant for India now, and many people think that I have created this after it.”
The artwork was completed last year, but he decided to get it to India to exhibit at the India Art Fair as demonetization has been making headlines worldwide in the last three months. “The idea to work on this installation was on my mind, but I suddenly realised that the Indian government had banned Rs 500 and Rs 1,000 (only these two have been destroyed for the installation), so it makes more sense now. Through this artwork, I wanted to show that money is just an illusion, there is an oversupply, excessive printing of money in every country. I made different artworks to show that. Even Denmark has stopped printing money. I feel we are going to see printed currency only at museums in the next 30 years.” 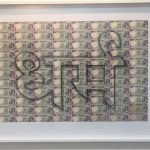